Back
After 50 years, nothing is the same at CARR-except the name. 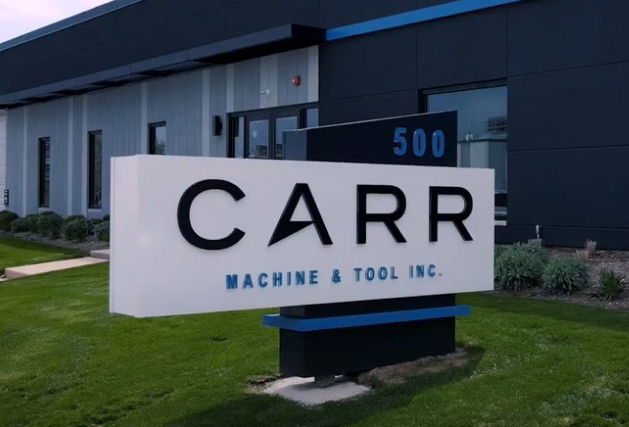 As CARR Machine and Tool celebrates its 50th year in business, President Jim Carr comfortably admits nothing in the company looks the same as it was when his father opened it in December of 1972. No color-coded binders filled with reams of paper. A brand new state-of-the-art facility. And no limit to what the future holds.

CARR provides low volume, high mix and high quality Computer Numerical Control (CNC) solutions for a variety of industries, including aerospace, defense, semiconductor, and medical. To align itself, its people, technology, and communication to match the industries it serves, CARR recently earned AS9100D certification. The accreditation tells aerospace manufacturers that Carr has the expertise and processes in place to identify risk, counterfeit, maintain a high level of quality control, traceability, and a lot more.

Jim Carr has grown the company very intentionally since becoming President and sole shareholder in 2004 as part of his father’s succession plan. Having worked at CARR for 41 years now, the company is all he has ever known. He learned the family trade by taking classes at the Technology and Manufacturing Association (TMA), where he landed a machinist apprenticeship and started at CARR on the shop floor in the early 1980s.

He has personally seen the industry evolve with the introduction of CNC machining in the mid to late 80s and in a managerial role in the 90s. Since then, Carr grew to serve on the TMA Board of Directors, eventually becoming its Chairman.

“I learned this business from the back door to the front door,” Carr said.

After suffering through the gut-wrenching 2008 recession, Carr leaned on his TMA relationships to learn about marketing and networking. His goal, he said, was to make sure the next recession wasn’t as painful.

In spite of the whispers of another global recession, CARR is on track for a record year, building on the company’s 600% growth over the past decade. Earlier this year, CARR moved into a new 15,000 square foot high-tech facility in the Elk Grove Village industrial park, the largest in the nation and recently named the #1 Ranked Business Park in the United States. The first-class aerospace machine shop is three times the size of its previous location on Jarvis Avenue.

With a young and passionate staff of only 12 craftsmen and a challenging (to say the least) labor market, CARR has to be as efficient as possible in order to maximize its revenue. Earlier this year, CARR implemented a new Doosan DVF5000 5-Axis Machining Center to produce complex parts with precision from a single setup while also leveraging automation. In fact, “lights out” machining hours (the holy grail of automation) have increased eightfold from Q1 to Q2. All the while, set-up hours are actually down 38% during the same time period.

As passionate as Carr is about manufacturing, marketing, and networking, he is just as passionate about sharing his experience to help others in the industry. In 2005, he and Jason Zenger (Zengers Industrial) launched the Making Chips podcast, now the number one manufacturing podcast in the world.

For the past four years, CARR has been an EOS company, implementing Traction, an entrepreneurial operating system created by Gino Wickman. The structure positioned CARR to find its “three uniques”: in this case, People, Technology, and Communication. It’s this framework that also brings the company’s core values to the forefront and helps put the right people in the right seat inside the growing manufacturing company. It has also forced Carr, himself, to focus on the company’s succession plan, as he prepares his son, Ryan, to lead the business in the future.

To learn more about CARR Machine and Tool, visit https://carrmachine.com/.

If your company is looking to establish or upgrade its working space, we would love to speak with you!

Please email the Business Development Team at BusinessDevelopment@ElkGrove.org to learn more about our business park and all the benefits that come from working here!