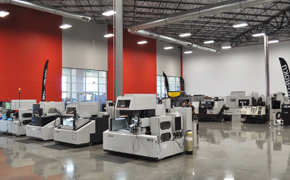 In April 2017, MC Machinery relocated to a 175,000 square-feet, state-of-the-art facility in Elk Grove Village, built from the ground up. Within the first year of being built, the new headquarters won Industrial Development of the Year award at the Made in Elk Grove Manufacturing and Technology Expo. A subsidiary of Mitsubishi Corporation, the company imports and distributes machine tools for wide-ranging industries with customers like Tesla, Nike and General Electric. They employ 320 employees nationally, including about 220 in Elk Grove Village.

We talked with Lou Clifford, Sr. Vice President of Logistic, and George Johnson, National Sales Manager - CPG Division, about what first prompted the move and what a year in Elk Grove Village has been like.

After outgrowing their previous space in Wood Dale, Illinois, MC Machinery was on the market for a new home for a state-of-the-art headquarters. With their Wood Dale facility being a little under 100,000 square feet, they were scaling up by 76% and did not take the move lightly. Starting five years ago, they began the hunt for the ideal municipality.

"It was a hard choice," explained Clifford. "We needed to stay close enough to our former location that our employees wouldn't have too long of a commute. We also had certain land requirements and needed to be in an area with high visibility," meaning with easy access to O'Hare International Airport and the I-90 interstate.

The MC Machinery team did extensive research to inform their decision. While other municipalities fit the bill for land requirements, the Elk Grove Village administration put in the extra effort to welcome MC Machinery to a community of makers. "Elk Grove really stepped up and demonstrated that they wanted to work with us," explained Clifford. The municipality also offered a Class 6B tax incentive, which lessened the hurdle of moving into the higher tax bracket of Cook County.

Elk Grove Village didn't lessen efforts to add value to the relationship after the deal was made. After the land purchase was completed, city inspectors worked with MC Machinery to stick to a tight construction timeline to guarantee an on-time move-in date of April 2017. The partnership continues as MC Machinery expands with a new 30,000 square foot distribution center.

So, what has 14 months in Elk Grove Village been like? The new facilities have been a universal hit with team members, customers and career candidates. The carefully curated space is an incredible sales tool. When a customer first enters, they immediately experience 50,000 square feet of showrooms displaying the breadth of machines available. Remaining space is used for training, warehousing, machine maintenance and repairs, and MC Machinery's Encore program, which provides customers an affordable way to trade in older machines and update to newer, more advanced technology. "This space gives the customer the best experience possible," said Clifford.

It's not too bad for employees either. The facility boasts an open-office environment with plenty of collaboration space. "It was a large shift from our previous space that was full of cubicles," stated Clifford. "I second guessed some of the changes at first, but after three to six months the team really began to take advantage of the collaboration areas and use the space to its fullest potential."

With a tight labor market, the facility is also critical for attracting top talent: when candidates come in for interviews, they immediately know they would be working with a class act.

Johnson also noted the heightened visibility their location in Elk Grove Village gives them: "We're the first thing our customers see when they're coming in from O'Hare." He recalled a time when a customer was driving on I-90 to a competitor from the airport, but coming across MC Machinery first, the customer stopped in and purchased MC Machinery's product instead.