Registration is now open for the 2022 Made in Elk Grove Manufacturing & Technology Expo on October 17th.
Join a growing list of innovation forward exhibitors and attendees. 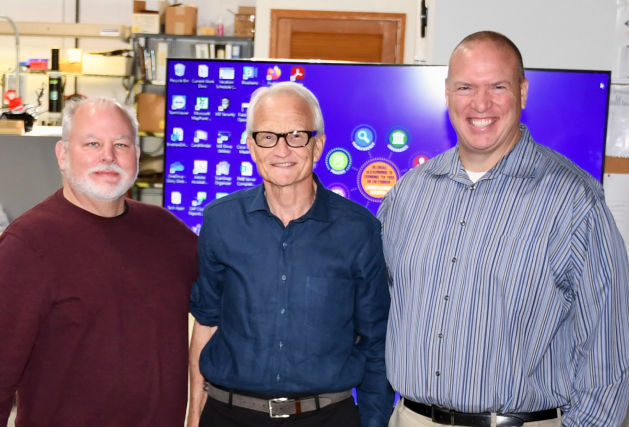 The company has best been known for a service in which it puts electrical components onto tape and reel so contract manufacturers with surface mount equipment can automatically place them onto circuit boards.


The team at NuWay Electronics loves solving problems for contract manufacturers with surface mount equipment and making customers’ lives easier through its tape and reel service. In fact, the company’s motto is Connecting customers with solutions. As new owner and president Doug Hamilton recently said, he wants NuWay to be the kind of company that is easy to do business with–much like Elk Grove Village strives to be Beyond Business Friendly.

“We’ve got our hands full supporting our customers and manufacturing our products,” Hamilton said. “One of the things we like about Elk Grove is that the bureaucracy is low and we’re given a great opportunity to operate a business here.

“No business owner wants their village to be a roadblock, we all want to be supported,” he added. “And none of the other communities I’ve seen support businesses the way Elk Grove does with job fairs, manufacturing lunches, leadership discussions, and vital networking within the community.”

Hamilton pointed to the high density of electronics OEMs and electronics support activity in Elk Grove as being very attractive, compared to other areas in Illinois. Most of NuWay’s customers are located within a 50-mile radius, and many can even be found within the same business park off of East Higgins Road and Martin Lane.

Thanks, in part to a Paycheck Protection Program (PPP) loan, NuWay was able to keep all of its employees during the Covid-19 pandemic and even thrived as an essential business.

As part of the purchase agreement, Hamilton asked Aldeen to stay on during a key three-month transition period. In the first month of that transition, they both visited the company’s top 10 customers and suppliers. The response was very supportive and encouraging.

Being from the Northwest Suburbs (now living in Arlington Heights), Hamilton knew of NuWay, but he didn’t know the company’s people. In fact, as is often the case, the new owners could view the company’s full financials, but weren’t allowed to meet the NuWay employees until after they closed the deal. Hamilton relied on an analysis of the company’s low turnover rate to gauge the strength of its culture. Fortunately, that data has been validated by his experience so far.

“We could tell [Aldeen] established a culture built on respect here,” Hamilton said. “Some people have been here for 15 or 30 years. That means they’re being treated right.

“These people care about each other and enjoy working together,” Hamilton added. “I couldn’t be happier with the company culture here and how everyone is embracing the next generation of ownership.”

NuWay’s revenue is evenly split between its service side, its cable assembly and circuit board manufacturing for OEMs, and its sales and distribution of specialty components. The company has best been known for a service in which it puts electrical components onto tape and reel so contract manufacturers with surface mount equipment can automatically place them onto circuit boards.

With a recent shortage in semiconductors and components, companies are buying them any way they can–and they aren’t usually coming on the tape and reel they need, so that service is extremely important right now.

Hamilton hopes NuWay will soon become known for cable and harness assembly and sub-component assembly as an OEM supplier.

Most people think of cable assemblies as very high labor projects. Although there’s always a touch involved, NuWay’s elite equipment–like its ARTOS automated wire cutting and stripping machine puts them ahead of the game by allowing them to cut, strip, and terminate thousands of wires per hour. With four to six crimping machines running, NuWay has already won an opportunity to support 10,000 cable assemblies per week.

Since its change in ownership, NuWay has been focused on increasing operating profits and throughput by bringing in lean processes, eliminating wasteful steps and introducing new technologies like 3D printing and soon a new ERP system to replace antiquated financial and manufacturing planning systems.

With him, Hamilton also brings NuWay the knowledge required to pre-program chips and put them on tape and reel as a new offering that saves customers steps and adds value by bundling services.

That service exemplifies the company’s goal to connect customers with solutions. By making it easy for its large customer base, which includes companies like Honeywell and Rockwell, to do business, NuWay is also showing what it means to be Beyond Business Friendly in Elk Grove Village.

As NuWay continues to grow, the company is searching for help in light electronics assembly labor with skills in cable assembly, in particular. Interested candidates can email info@nuway.net, call (847) 437-7120, or walk-into 165 Martin Lane in Elk Grove Village.

If your company is looking to establish or upgrade its working space, we would love to speak with you!

Please email Josh Grodzin at JGrodzin@elkgrove.org to learn more about our business park and all the benefits that come from working here!