Back
Termico’s Perseverance Turned into an Award-Winning, Lifesaving Product 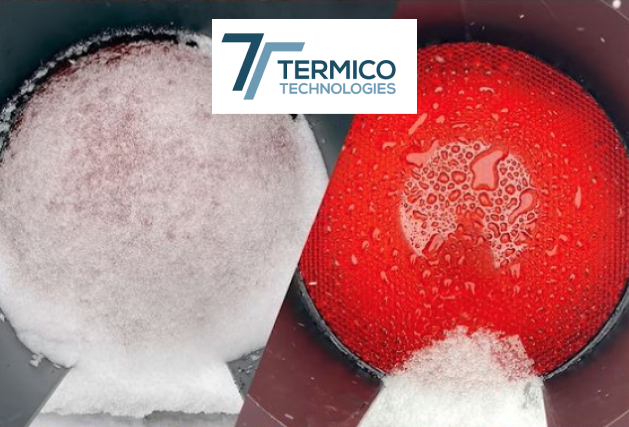 How a snowy commute led to an innovative design that could help save lives.

Termico produces polymer heaters through a screen-printing process that deposits conductive polymer inks onto a thin, flexible substrate. Self-regulating and safe to the touch, these heaters are energy efficient and capable of maintaining a steady temperature. Termico has previously used this technology for things like heated car seats or surgical tables, but their most recent innovation has won them an IMA Maker’s Madness award as the 2021 Coolest Thing Made in Illinois. And rightfully so.

“If you look at every single product we've ever developed, it's always been a matter of perseverance. You’ve got to solve one obstacle, then the next, and the next. Then, before you know it, you've got something that's really, really solid,” says Mike Cubon, Chief Technology Officer at Termico.

“We started a self-regulating heater division about two years ago. Within a couple of weeks of starting it, I was on my way to work when the snow started coming down and clogging the traffic lights. And the real problem with current traffic lights is that they are all LED lights. And here's the real catch with that: LED lighting is super-efficient, has a really low operating cost, and they last for a very long time. But they don’t generate any heat, so they won’t melt snow that builds up on them. And that is dangerous. ” Mike explains.

“Honestly, my initial thought was, ‘How often does this really happen?’ I figured it had to be a certain set of conditions and figured those didn’t occur that often,” said Mike. But the second snow of that season was much worse. Mike continued, “The CEO of our company, Gary Sullo, called me and asked, ‘What do you guys have to solve this? Because I'm standing behind an accident right now up in Buffalo Grove. This is a dire need.”

That’s when the self-regulating heater team went out and bought an actual traffic light.

Mike admits that it was fortunate Termico decided to set up shop in Elk Grove Village because it was a chance encounter that got them into their first street intersection.

“Elk Grove Village was awesome,” Mike recalls. “They came in when we were just building our facility. They had to do some inspections of our equipment, and they saw we had a traffic signal in there and asked us what we were doing.” Mike and the team explained the technology of the self-regulating heater they were developing to Elk Grove Village’s team, and they wanted in. Mike recalls the team saying, “We’re going to have our Director of Public Works, Colby Basham, contact you because we want to be a part of this.” The Elk Grove Village team called a day later, and after explaining our work, they said they wanted to try the self-regulating heater on some intersections. And within three months of that time frame, they had designated a couple of intersections in Elk Grove Village for us to try.”

And then it didn’t snow for another 12 months.

“When we started out, we couldn't test it because we didn't have any snow. It's springtime, then it's early summer, and we really didn’t have any way of seeing what was working. So we bought a couple of snow cone makers. We figured we'd grind up some ice, and pack it into our traffic lights, and we'll see how long it takes to melt,” Mike recalls.

“The hours that we sat in front of that environmental chamber waiting for the ice to fall out of the lights were countless. Those defeated moments always seemed to happen on a Friday -- like Friday at two o'clock we'd start a test and Friday at six o'clock we were still there watching it not working. Then we’d go into the weekend like, I guess we'll start over Monday.”

The team tried every idea they had, everything from their traditional bag of tricks, and none of it worked.

Days passed. Weeks passed. They attempted countless ways of trying to apply the polymer heat strip to the light. But there was an issue with this. When put directly on the light, there was a concern about light output and how much light was visible.

“It was on a weekend or late night,” Mike remembers, “that I was considering abandoning the thought of trying to do something on the light. We had some heaters for another application, so I covered the inside of the visor with it instead. As soon as we plugged it in, that was it.”

The end result is an energy-efficient, self-regulating heater that automatically triggers when temperatures get cold and snow starts building up. This way, traffic lights can maintain visibility and ensure driver safety.

“The thing I really want to emphasize when we talk about our product is the safety aspect of it,” Mike adds. “We use it in a lot of other applications. Specifically, it’s used in things like patient warming because of the way the product works, because of its reliability, and the fact that we run it at specific temperatures for specific applications — it's inherently much safer. And super energy efficient.”

This year, Termico has partnered up with a company called MoboTrex—one of the largest U.S. companies for making traffic signals. And unlike the last year and a half, there’s been plenty of snow.

“We're talking to everybody now,” Mike says. “We were on the phone recently with Colorado, talking about their problem. The folks in communities across the country have been trying to solve this problem for more than a decade, ever since the first LED traffic lights came out.”

The product itself is still in its infancy in terms of number of units sold so far, but Mike is expecting this to be a pretty significant second half of the year for Termico. Thanks to all of their testing, they’re feeling confident about their ability to help now.